The world’s first terapixel macro image is a big claim. This is going to be BIG! Actually, about eighty-three feet big – or long anyway!  Just how big is that though?  Well a terapixel is 1,000,000,000,000 pixels, or 1012, or a million megapixels, or a thousand gigapixels.  And no one has ever made a terapixel macro image before, so this will be a genuine world’s first.  We have seen all the claims of terapixel images, some of which could be debated; we decided to make a terapixel macro image which has never been claimed. It has been Gene’s ambition to make such an image for years, and we have debated what the subject should be for hours.  In the end Gene’s original idea of food won out.   Food when viewed at high magnification takes on an abstract form and it’s often impossible to work out what it is you are viewing.

Attendees at Siggraph 2014 will be able to see the GIGAmacro team photograph a one terapixel macro image. Over 619,000 individual photographs of food and foodstuffs from around the world will be captured and combined to create a seamless one terapixel image.

Here is a example of how the food will look on the panels, ready to be photographed: 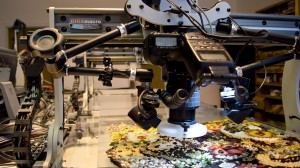 Rig setup with food mosaic. Test for creating the terapixel macro image made at Sigraph, 2014. Vancouver, BC.

Of course in reality there will be about eighty-three feet of food, all arranged and laid out by the team and volunteers.

To include participants worldwide in the preparation and creation of the image, suggestions for food to be included, as well as comments are invited via Twitter. All tweets that include the hashtag #terabite will be incorporated into the border of the final image. Viewers will be able to zoom and scroll to find their own message preserved for posterity in the world’s first terapixel macro image.  If you’d like to follow our trials and tribulations – and exultations – please follow us on your favorite media.  The button at the bottom left (in the Get In Touch panel) will connect you to us on each of your social channels of choice.  And we’d love it if you shouted about what we are doing to all your friends and invite them to join in the fun. If you have friend in the media, there is a press pack here.

See history in the making as a one terapixel (one million megapixel) photograph is created. Three GIGAmacro Magnify2 systems, using off-the-shelf camera equipment and a dash of ingenuity provide the technology needed to create photographs with unlimited resolution and incredible microscopic detail.

Here is what Coconut looks like at high magnifications: 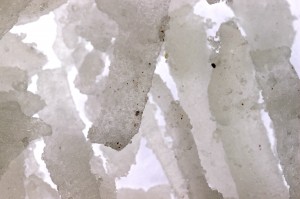 We will be shooting the Terabite photographs with three GIGAmacro Magnify2 systems, each configured with a Canon 5D MkIII, Canon MPE-65 Macro lens (set at 1.5X), and using Canon M-24EX Twin Macro Lite. The GIGAmacro Capture Software will operate the robotics and camera systems during the capture process.

This is what it looks like in testing (with a peep at Gene too):

Three rig setup for creating the terapixel macro image made at Sigraph, 2014. Vancouver, BC.

All exposures will be made at f10 1/125 second. These settings will give us a Field of View of 22mm. Depth of Field will be 1mm and as our subject has a 5mm height, that means we need to shoot six photos in each “stack” with a 20% overlap for each focus position.

There will be 37 columns, 45 rows and 6 stacks, for a total of 9990 photographs on each Layout Panel.  Time to shoot each panel is 3.42 hours @ 3000 images per hour, for a total capture size of 16.8 gigapixels per Layout Panel.
588 megapixel are “lost” due to overlap with next layout panel in stitching.  This gives a net of 16.2 gigapixels per panel.  Image resolution is 6477 pixels per inch.

The team will use a combination of software packages to post-process the photographs along with GIGAmacro Viewer to provide online access to the explorable terapixel image. For post-processing, Zerene Stacker will be used to create a high depth of field image from each “stack” of 6 images. AutoPano Giga will be used to “stitch” the images together into a seamless image. Zoomify will be used to produce “tiled” image sets of the final image. The GIGAmacro Viewer will provide online access to the full seamless terapixel image allowing the public to explore, share, annotate, and discover.

These folks made it all possible.

Without the help of these sponsors, we would have not been able to tackle this amazing project.  Our gratitude and thanks to each and every one. Behind each of these corporate sponsors, there are people who went out of there way to help gain their organization’s support, rooted for us and made things happen when we needed them to happen.  They will be able to say forever that they were key to, and part of, the World’s First Terapixel Macro Image. 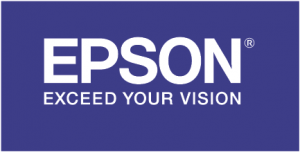 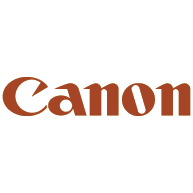 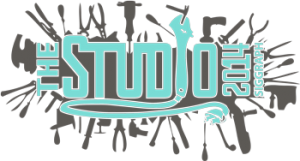