What a month it has been!  The first half of August, we drove two vehicles from the bay area to Vancouver, BC, a journey of a little short of 1,000 miles each way.  We were there for SIGGRAPH conference, exhibition and an area for experimentation and leading edge technology called ‘The Studio‘ – that’s where we set up our project. It was there that we captured the almost 650,000 photographs we need to make the terabite image, a one terapixel macro image [Final image here]. A terapixel is one trillion pixels (or a million megapixels) and meant using three simultaneously shooting Magnify2 systems equipped with Canon 5D MkIII cameras for more than three days. The expectation that we would work long hours was confirmed when we got our access badge: 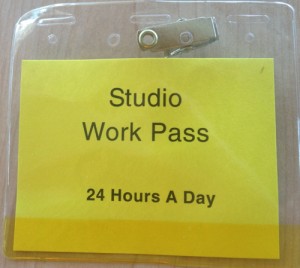 Here is more about it and what it looked like, in an interview with SIGGRAPH. The numbers for this project are amazing:

Each photograph was 22mm X 14.5mm and we took six photograph (in a stack) at each view location.  We did this because the depth of field (or height that is sharp) is about 1mm, and we limited the food height to 5mm.  Our volunteers didn’t always stick to that, so anything higher than that will be out of focus in the final image. Resolution is 6477 pixels per inch.

The process was that the Student Volunteers – we had three assigned for each shift – along with anyone else who wished to join in, laid out food in a mosaic or pattern of their choosing on each sheet of plexi.  These sheets were then fed into the system, taped to the sheet preceeding and the gap covered to match the ends of each sheet.  Here is an example of some of effort that people put into their designs and how it looked on the system: 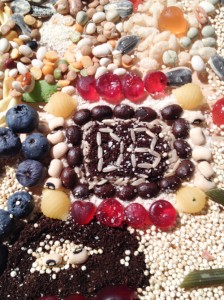 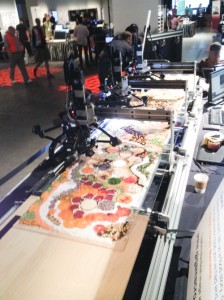 Here is how the preparation area looked (video) with the volunteers in the center foreground preparing the food mosaics and the Magnify systems to the left, shooting away at about 3,500 image an hour each. It was mainly smooth running: we learned a lot about the systems;

So now we have in our hot little hands about 645,000 photographs that need to be processed.  We have many ideas on the way to process everything, but we are breaking new ground here.  As I said in the interview  one trillion pixels is a lot of data!  Just to give you some idea, the stacking alone is at least a couple of weeks work – fortunately mostly computer processing.  Then we have to stitch the resulting images into a single, terapixel, whole. And then break that huge image into the ’tiles’ that we use to look at our images via the web.

More as we progress with the processing……

Graham has worked as a business and marketing leader in high technology, aviation and not-for-profit large and small organizations. He jumped out of corporate life in 2007 to ‘have more fun’ and does so helping small companies with strategy, business, and marketing as well as traveling and taking pictures.

He loves working with smart groups of people to solve challenging problems.

Gadgets of all sorts (especially anything to do with aviation and flight) and photography have fascinated since early childhood. He is also an accomplished photographer who exhibits regularly and a former competition aerobatic pilot.
Graham is a transplanted Brit (hence the humo(u)r) who has lived and worked in CA since 1996.
He is a Fellow of the Chartered Institute of Marketing.