In this brief study, we examine efficient methods for imaging entomology collections with the following aims:

The key decision is weighing the tradeoff between the ultimate resolution and depth of field and a practical time to produce the image.  Clearly as the resolution and focus depth increases, the time to photograph the images (and to a much lesser extent, to process) increases.  It is key then to consider and decide the appropriate resolution for each section of, or for the whole, collection.

This decision is non-trivial as it is often tempting to get the collection viewable and online as soon as possible – a significant step forward from today’s inaccessible collections.  However, the majority of the time and staff effort is in retrieving, preparing, and setting up the specimens for imaging and then returning them to storage.  The actual photography is fully automated, as, to a lesser extent, is the processing which may require some manual intervention and decision making for optimum results. Given that, we believe that choosing a resolution for the automated photography part of the process is the critical decision.  Once the photoset is captured, lower resolution images can be easily and quickly created.

We expect that image consumers (be they academics, visitors, web users, etc.) will demand, over time, better quality  (that is sharper, more detailed, more accurate color, etc. images) and better tools, for example for annotation.  The analog here is mapping, think of the resolution and information on web-based mapping systems ten years ago versus today.  We believe that capture should be done once, and those original photographs stored with full metadata and detail, so that subsequent demands for improvements in quality, as above, can be met.  We also believe that significant improvements  in computing power, tools to process images and tools to extract detail in ways not yet available will all be applied to the captured photographs to produce new, and better, images.

Following the automated capture and storage, photographs can be rapidly processed for immediate inclusion in an online catalog, and over time higher resolution images can be added. 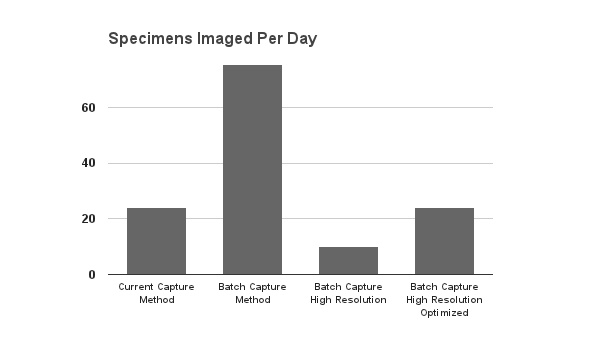 There are many methods for placing specimens and orienting them for the 3 distinct views in this example. Here we’ve chosen to use some inexpensive plastic containers to place the specimens, orient them for different views, and manage the process. We chose this method for the main reason that we can place each specimen once and then handle the plastic container to position the specimen on the imaging stage. We can also easily orient the container at the three different positions to be imaged (dorsal, lateral, and anterior). Many other options can be used an each institution’s may choose to use the method that works best for them. 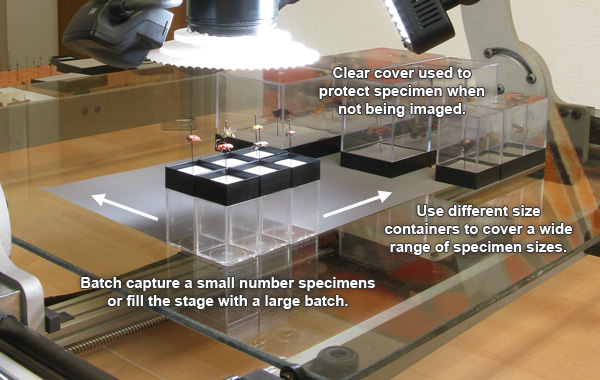 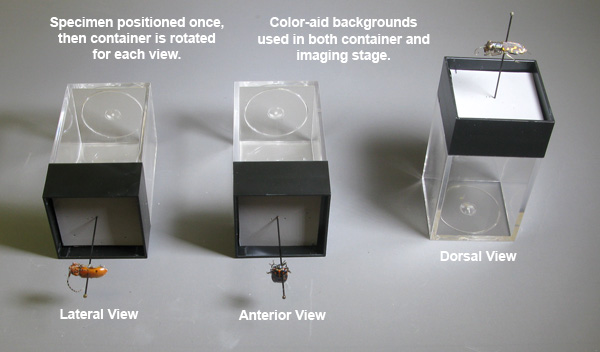 This process is based on the current imaging process in use at various scientific organizations for producing 3 views of entomology specimens. Each specimen is prepared, images captured, and post-processed as a single image stack. Average times reported are 3 specimens per hour (3 views each). An imaging technician is required during the entire process.

Additional time and efficiency can be gained by running the systems unattended overnight and/or at weekends. An additional 50% productivity improvement is anticipated.