So, what’s the big news you ask?  Gene Cooper, GIGAmacro and the Magnify2 are featured in a TV program on the History Channel

Examine the Dare Stones in the GIGAmacro Viewer 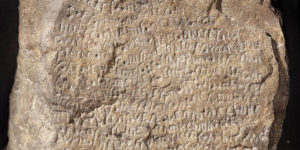 On the History Channel program…

You’ll see Gene and our colleague Rich Gibson imaging the key element of the program, the Dare Stones at Brenau University, Georgia.  Below is an excerpt from the program…

The program first aired on the History Channel, Monday 26th October at 9 Eastern, 8 Central and 7 Pacific is called “Roanoke: The Lost Colony.

About the Dare Stones

The famous – and to some, infamous – Dare Stones have been a part of Brenau University lore since the 1930s. At the height of the Great Depression, a mysterious Californian walked into the history department of Emory University with a 21-pound rock engraved with strange markings. The man claims he uncovered the stone, bearing the inscription “Anais Dare & Virginia went hence unto heaven 1591,” while exploring the swamps of North Carolina.

That piqued the curiosity of professor Dr. Haywood Pearce, Jr., who was also vice president of Brenau at the time. He and his father, Brenau President Dr. Haywood Pearce, paid $1,000 for what is now described as the “Dare Stone” – so called because many believe the writings scrawled upon the rock were made by Eleanor Dare, of the notorious “lost” Roanoke Colony.

A comprehensive history of the Dare Stones and its connections to Brenau is available in the feature “Brenau’s Pet Rocks.”

Graham has worked as a business and marketing leader in high technology, aviation and not-for-profit large and small organizations. He jumped out of corporate life in 2007 to ‘have more fun’ and does so helping small companies with strategy, business, and marketing as well as traveling and taking pictures.

He loves working with smart groups of people to solve challenging problems.

Gadgets of all sorts (especially anything to do with aviation and flight) and photography have fascinated since early childhood. He is also an accomplished photographer who exhibits regularly and a former competition aerobatic pilot.
Graham is a transplanted Brit (hence the humo(u)r) who has lived and worked in CA since 1996.
He is a Fellow of the Chartered Institute of Marketing.